Raging Stallion says: Lost in the desert Wasteland, Rafael Lords stumbles upon a mysterious compound. He thinks he’s gotten lucky to find shelter, but out of nowhere, Ryan Cruz grabs him and warns him of the danger he’s just stepped into. Ryan promises his protection, for a price.

With one look at Ryan’s ripped body and pierced nips, Rafael knows it’s a price he’s willing to pay. Dropping to his knees, Rafael stuffs Ryan’s cock down his throat and sucks with desperate intensity. Ryan returns the favor, spitting on Rafael’s cock and using his lips to stimulate the sensitive head.

Saliva drips down Rafael’s shaft as Ryan strokes himself. Moving to a bed, Rafael shows off his ass to Ryan, who dives in tongue first for a taste. Slicking up his cock, Ryan pushes himself into Rafael’s eager ass. Rafael takes Ryan’s cock doggy style, and his firm ass bounces with every impact of Ryan’s powerful thrusting.

Rolling over, Rafael raises his right leg into the air, allowing Ryan to pound his meat deep into Rafael’s hole. Sweat accumulates on their bodies as their fucking reaches searing intensity. As Ryan stretches the walls of Rafael’s hole, Rafael strokes his cock and shoots a massive, wet load all over his chest.

When Ryan falls asleep, Rafael stealthily gets up, grabs his gear, and makes a break for it. 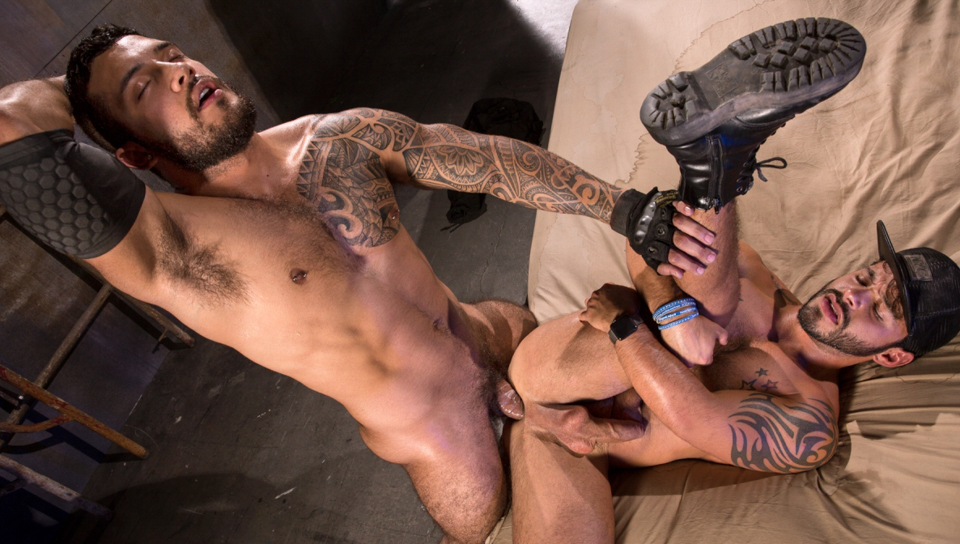